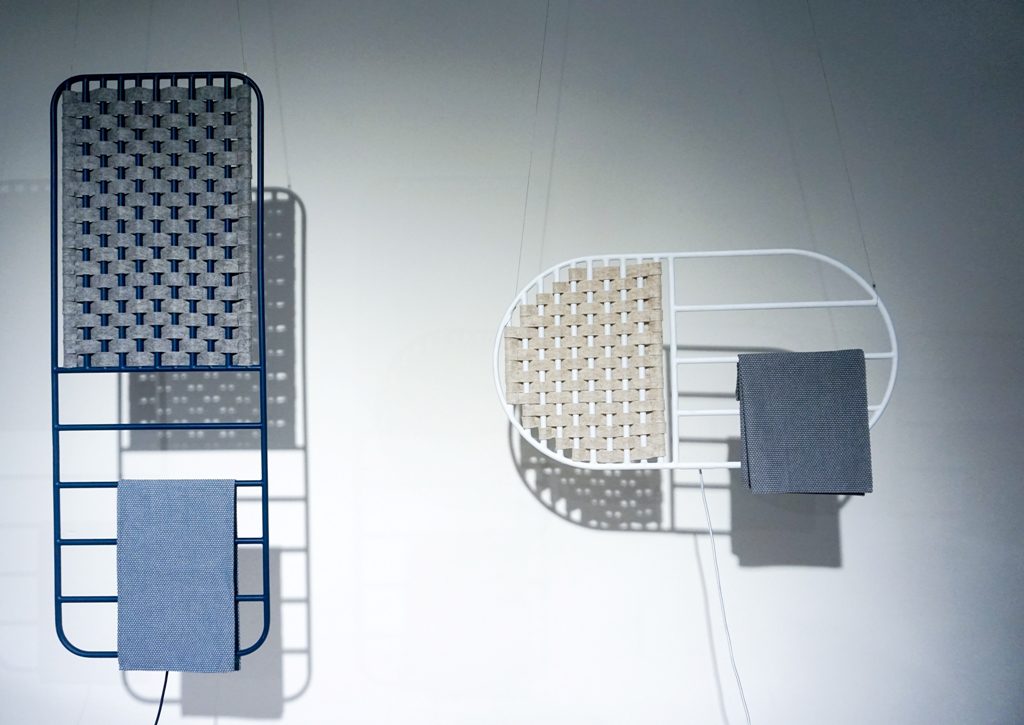 Woven Warmth by Alica Pola Knabe is a pair of towel heaters with gently rounded outlines and plaited felt textures that will hold on to their warmth as the heater cools. The felt decoration also helps to filter the air of the bathroom and absorb humidity 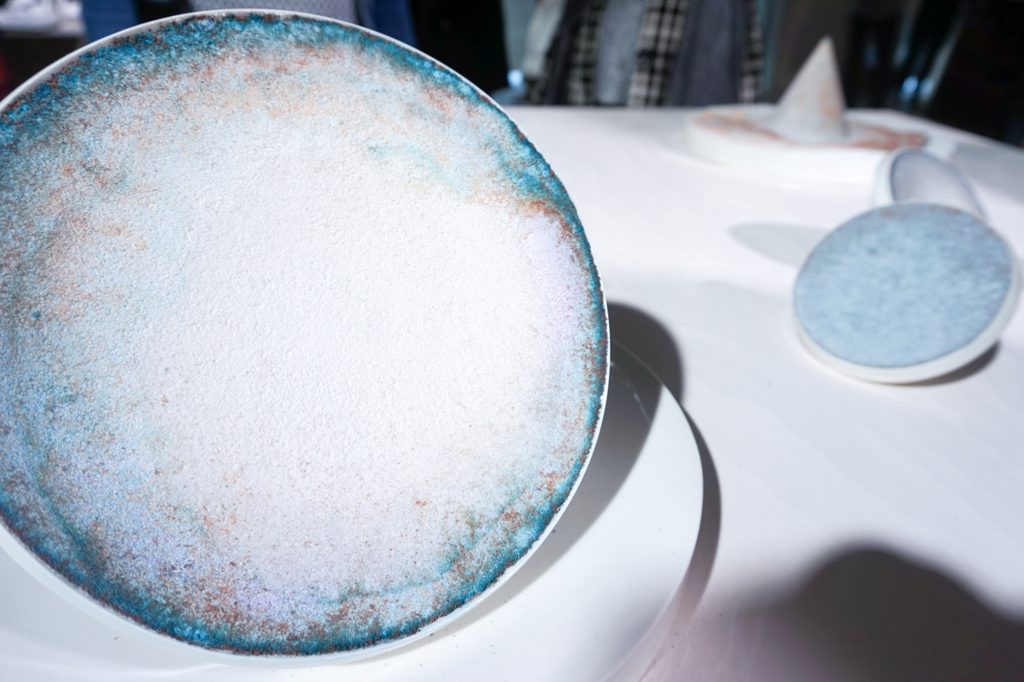 ‘Inner Weather’ by Eloïse Maës’ is an air cooler and humidifier, based on research of porcelain sand with Studio Unfold. Porcelain possesses the ability to absorb and diffuse water. Its porous nature allows the water to soak into the cavities between the tiny grains of porcelain sand. 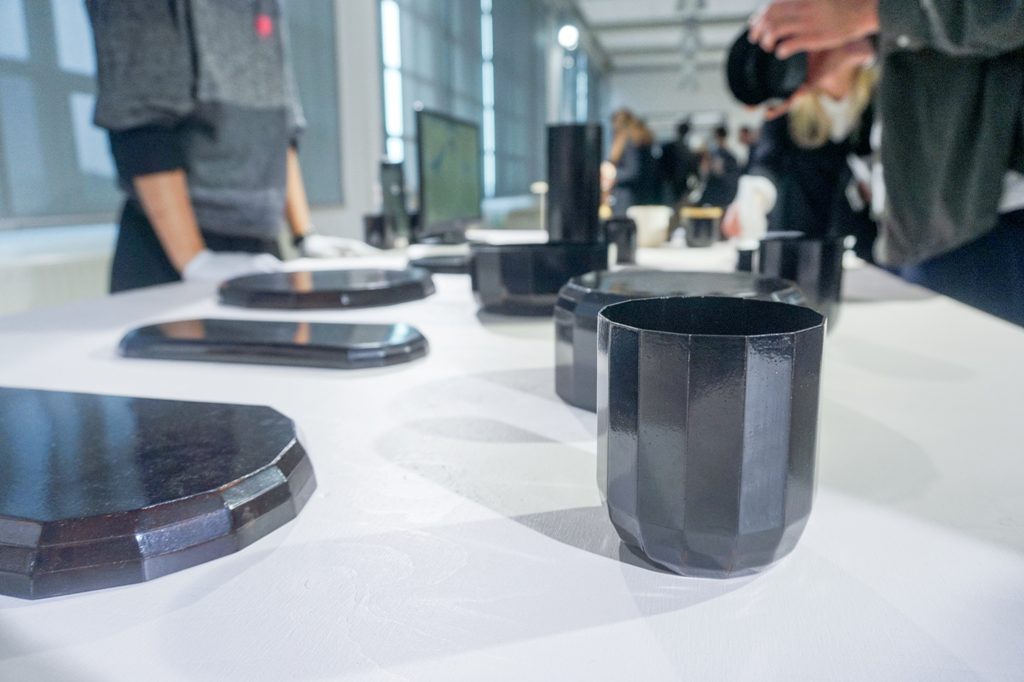 ’21G’ by Seung Bin Yang is created using a paper base instead of wood, inspired by Traditional Korean lacquerware is made using secretions from the Ott tree. What was once luxurious and heavy has now become light and modern, designed for everyday use. 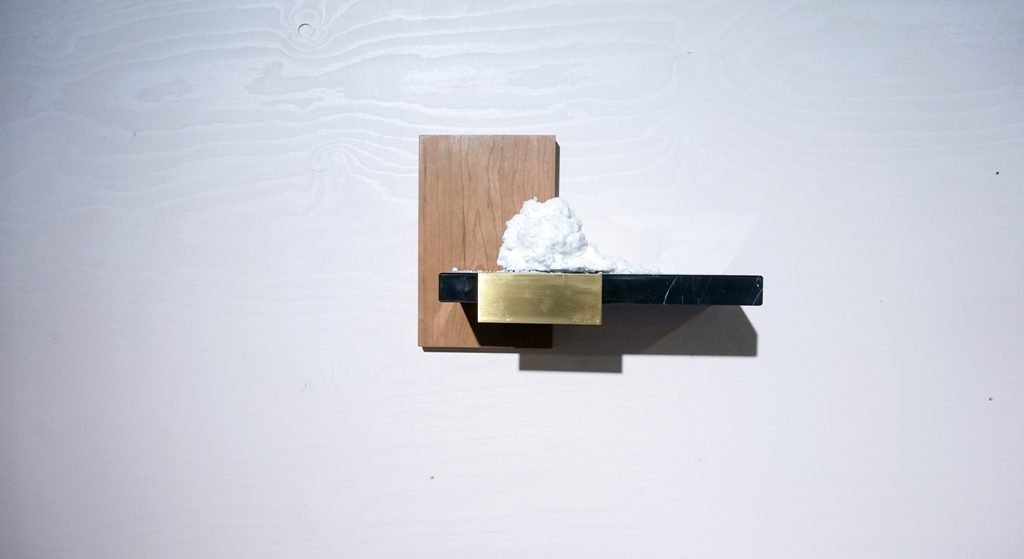 ‘Panta Rhei’ by Seung Bin Yang is a sculptural timepiece for the interior. Made of soap foam, it changes shape, gradually evolving and fading with every use. 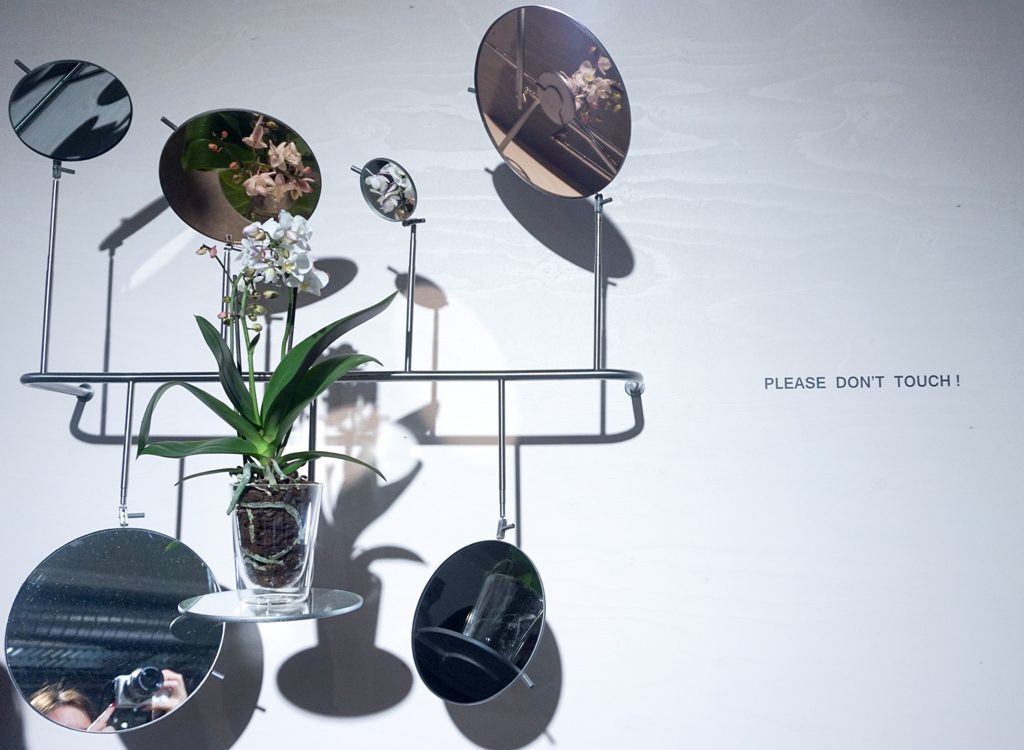 ‘Miró’ by Edite Jakubovska  is a display for your dearest plant, presenting it in eight different ways at the same time. Seven adjustable mirrors reflect parts of the plant, creating an abstract and ever-changing green landscape; a growing art installation. 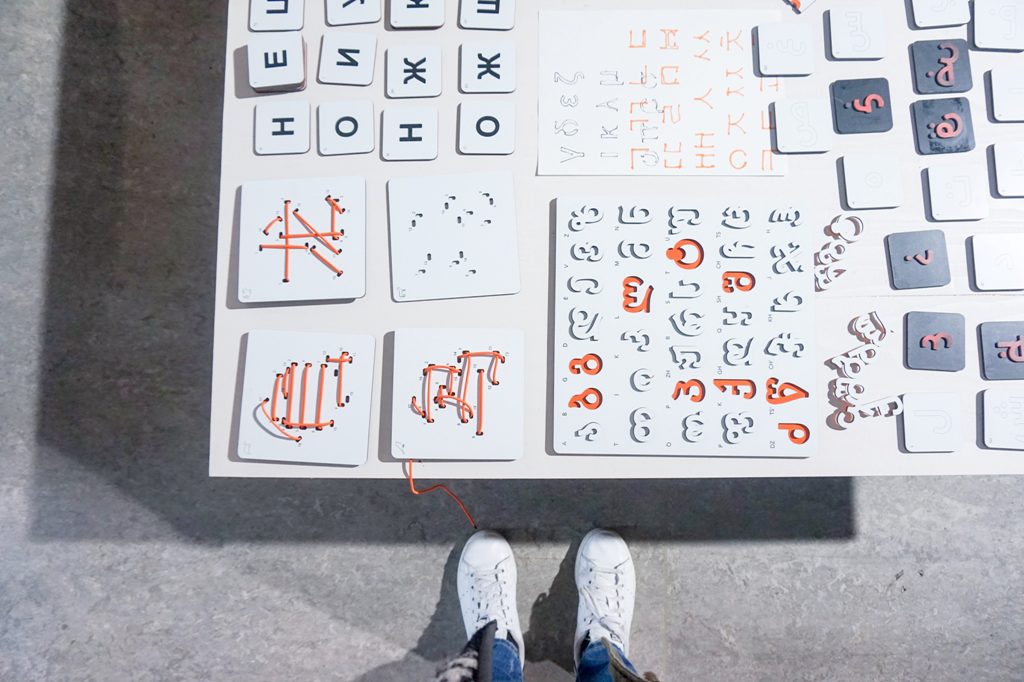 ‘M.O.T.S.’ by Juliette Pepin introduces five-year olds to different languages before prejudice can take hold. By playing with stamps, memory games, stencils and flashcards, children learn about up to 26 tongues, from Korean to Greek and Arabic to Punjabi. 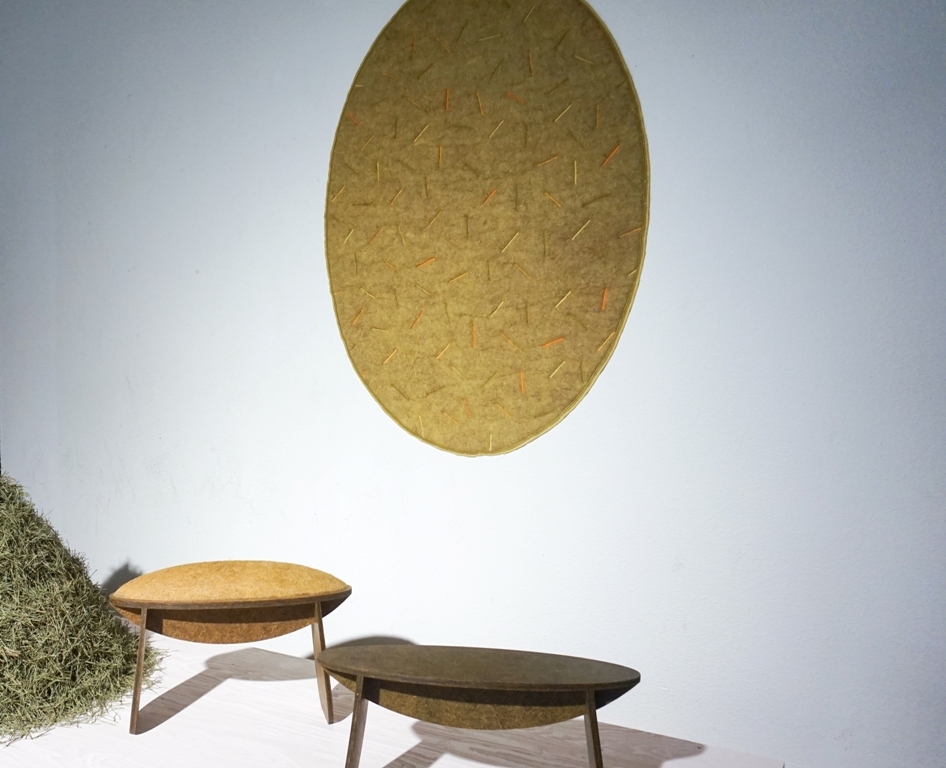 Forest Wool by Tamara Orjola is an investigation into materials centred around pine needles, an untapped resource with huge potential – 600 million pine trees are cut down in the EU each year, but the needles often go unused. Forest Wool harnesses techniques such as steaming and pressing to turn pine needles into soft textiles, durable composites and tactile paper. 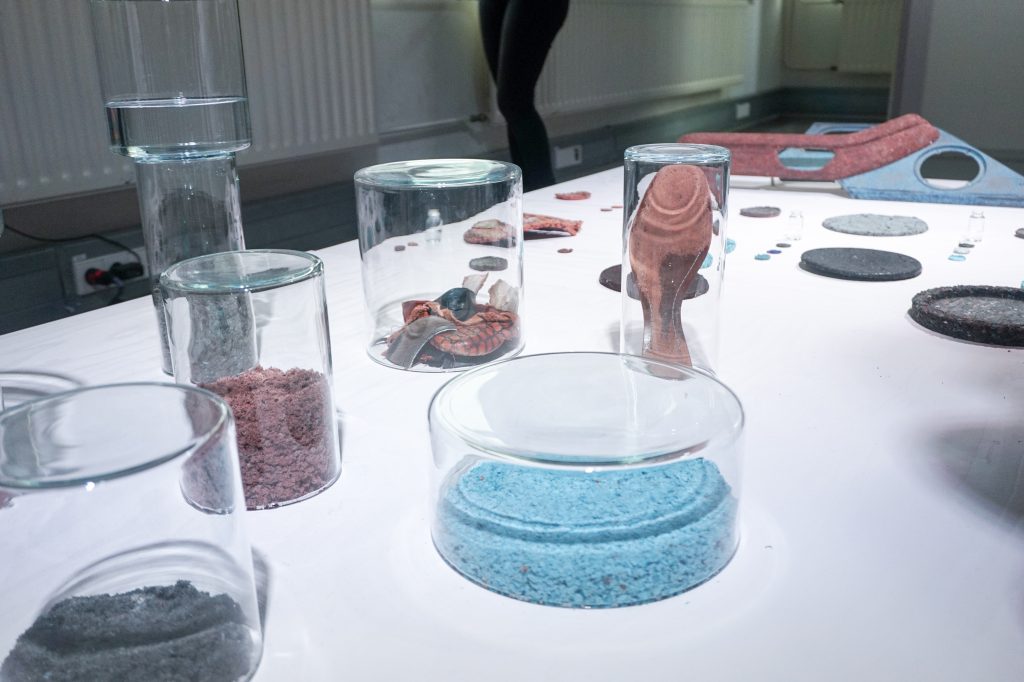 ‘Compoleather’ by Julie van den Boorn are leather goods shredded and mixed with hot water. When pressed in moulds and allowed to dry, the pulp gives rise to a new material that sticks together without the need for an extra binding agent. The result is still 100% natural. Multiple applications are possible, including car interiors. 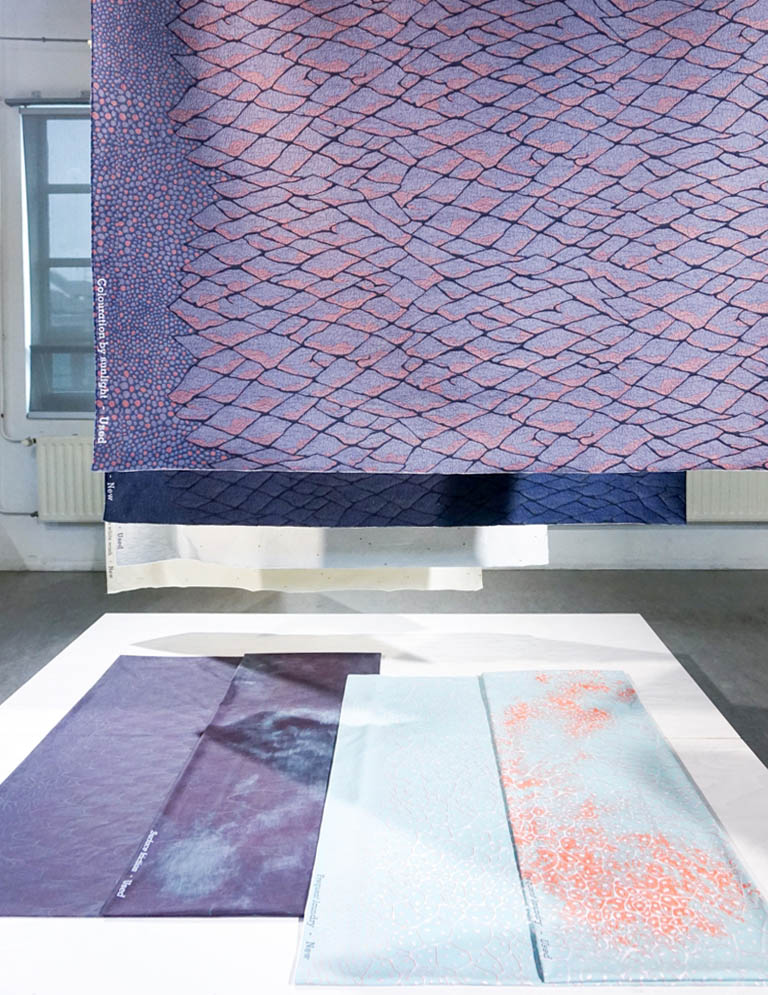 ‘Time Included Cloth’ by Cox Janssens are textiles based on the flexible, changeable properties of skin, tempt users to make them last longer. Time and use are now embraced: instead of diminishing them, processes such as washing, surface friction and sunlight increase the interest and value of these five different fabric designs. 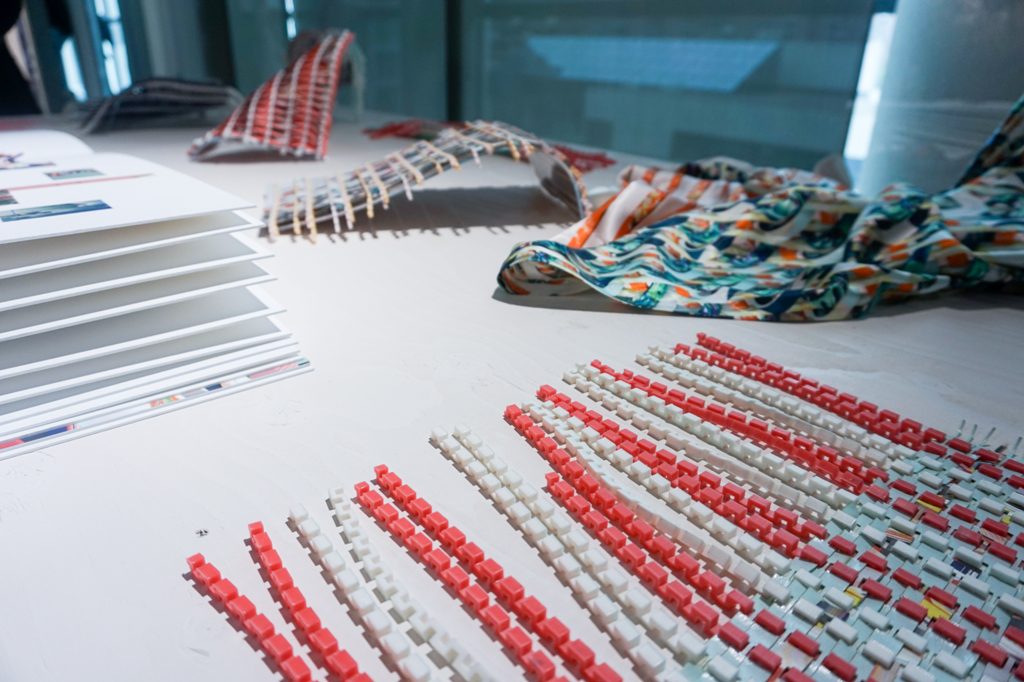 ‘Merging Cultures’ by Teresa Mendler are fabrics which collect, deconstruct and reassemble individual expressions of heritage into dazzling techno tweeds. Rooted in different traditions, each thread has a unique story as it is translated into 2D prints and then transformed again into 3D woven structures. 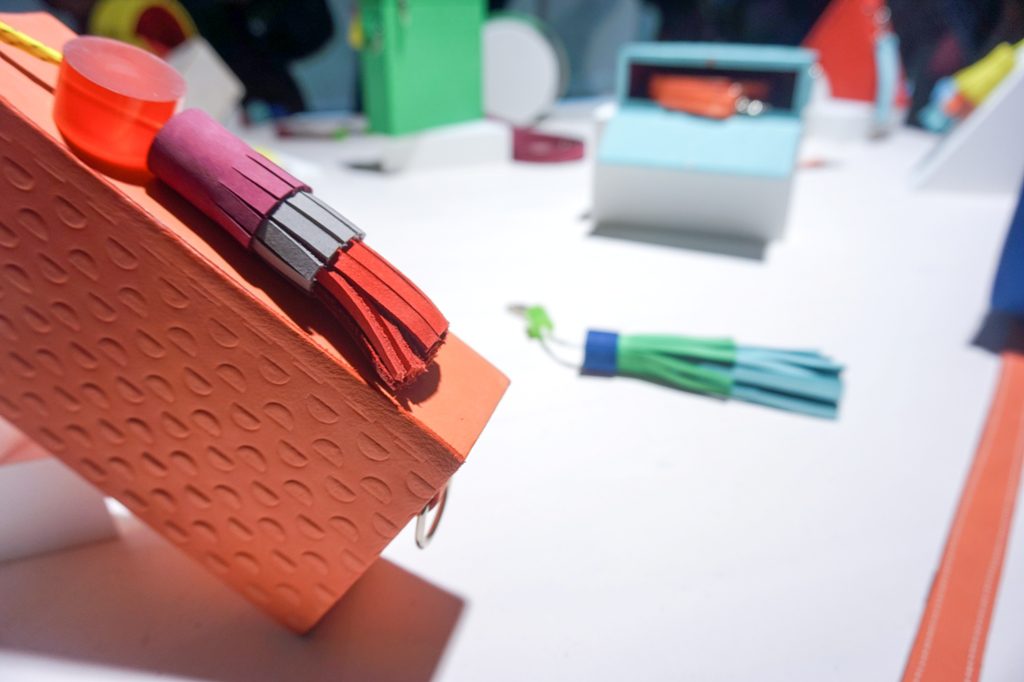 ‘Play My Game’ by Océane Algaron

‘Play My Game’ by Océane Algaron is a set of modular bags, straps and pompom designed to be mixed and matched in playful combinations . 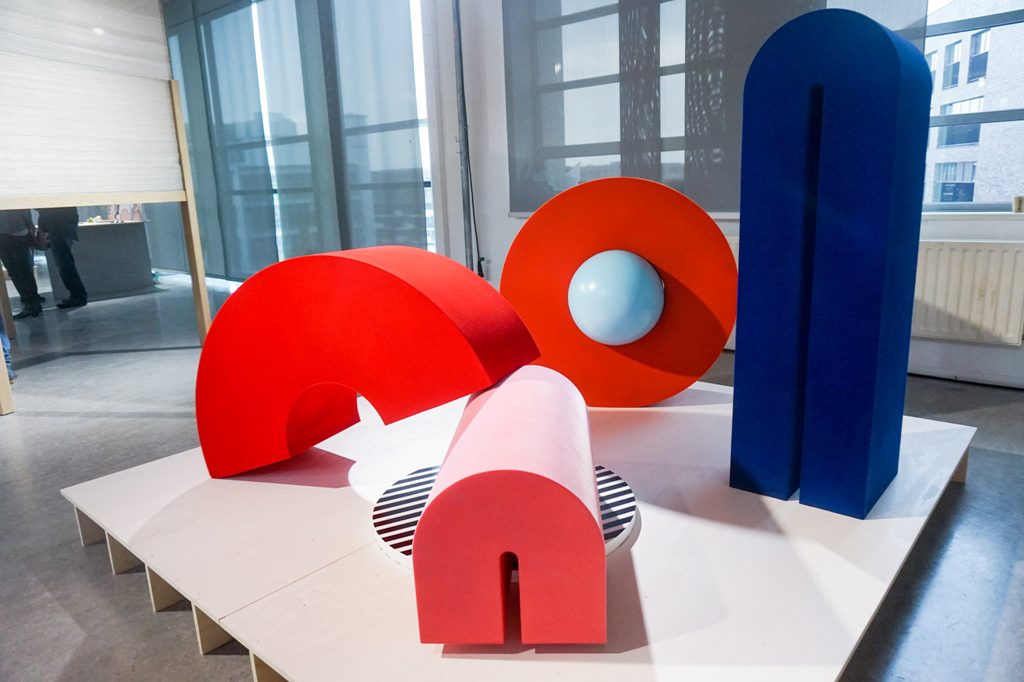 “The Odd Ones” by Mandy van der Heijden

“The Odd Ones” by Mandy van der Heijden are classroom furniture with a playful twist. Jumping, spinning, rolling and climbing – it all becomes possible when children are finally given room to move. 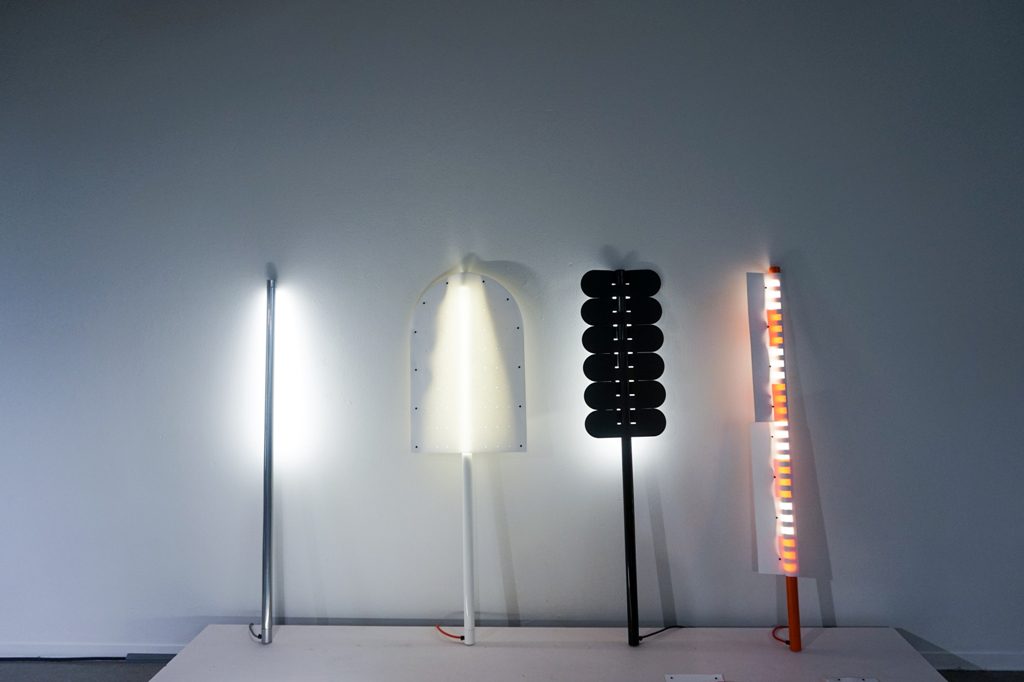 ‘When Logic Meets Bliss’ by Dewi Kruijk are four light objects are made from a single LED tube light and different flat paper shades that slide on easily. The construction is simple, keeping the focus on the paper as an expressive medium. 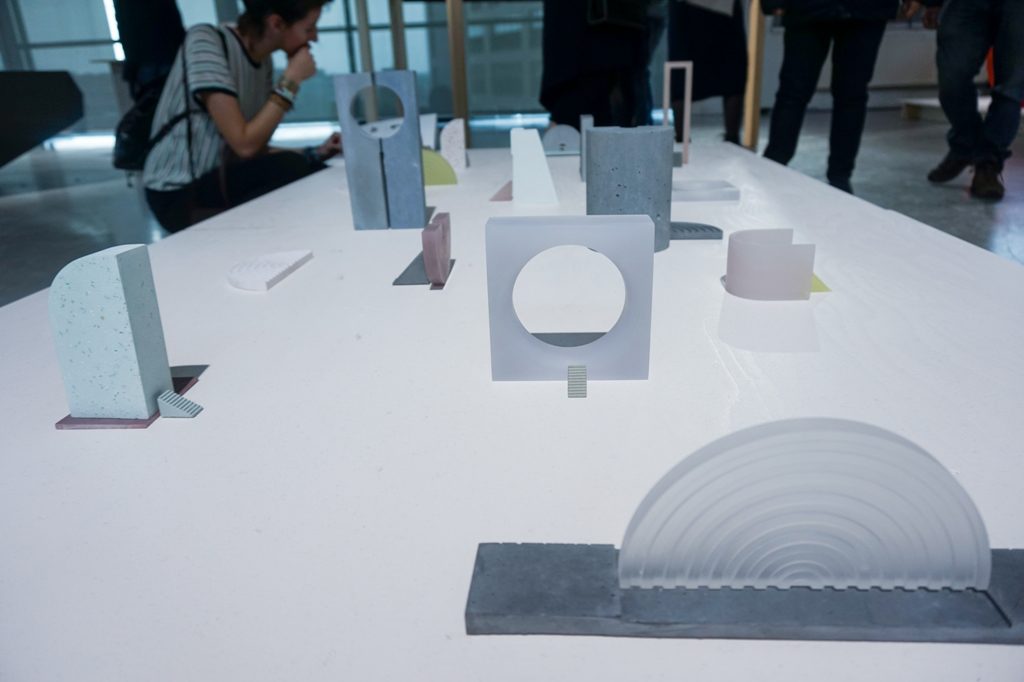 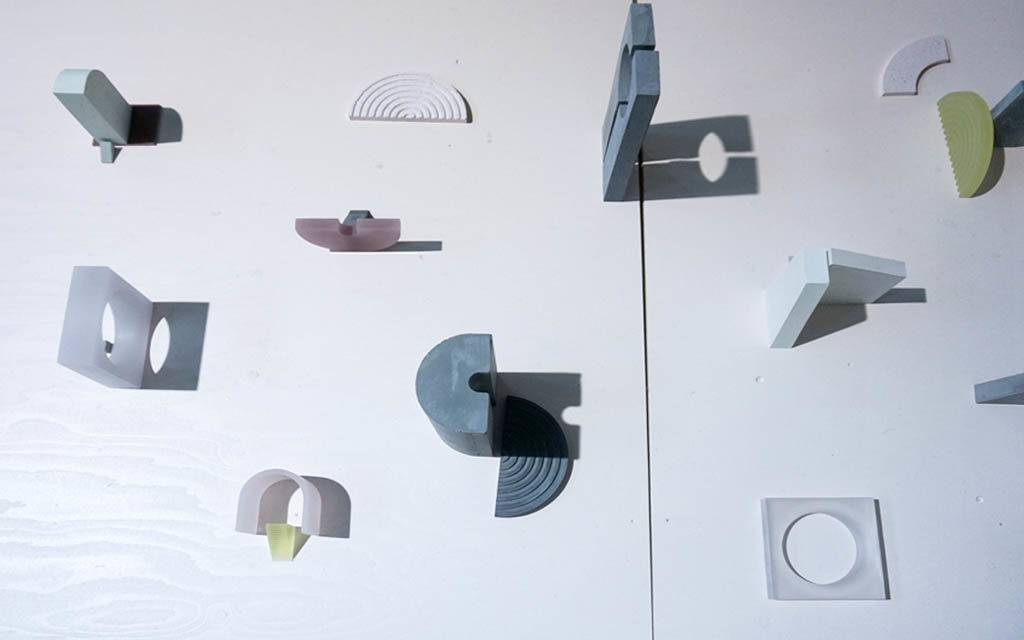 ‘Conversation Pieces’ by Mila Chorbadzhieva takes distinctive details from monuments that have stood neglected for decades and casts them in a mix of concrete and resin, to be reintroduced as architectural elements or decoration 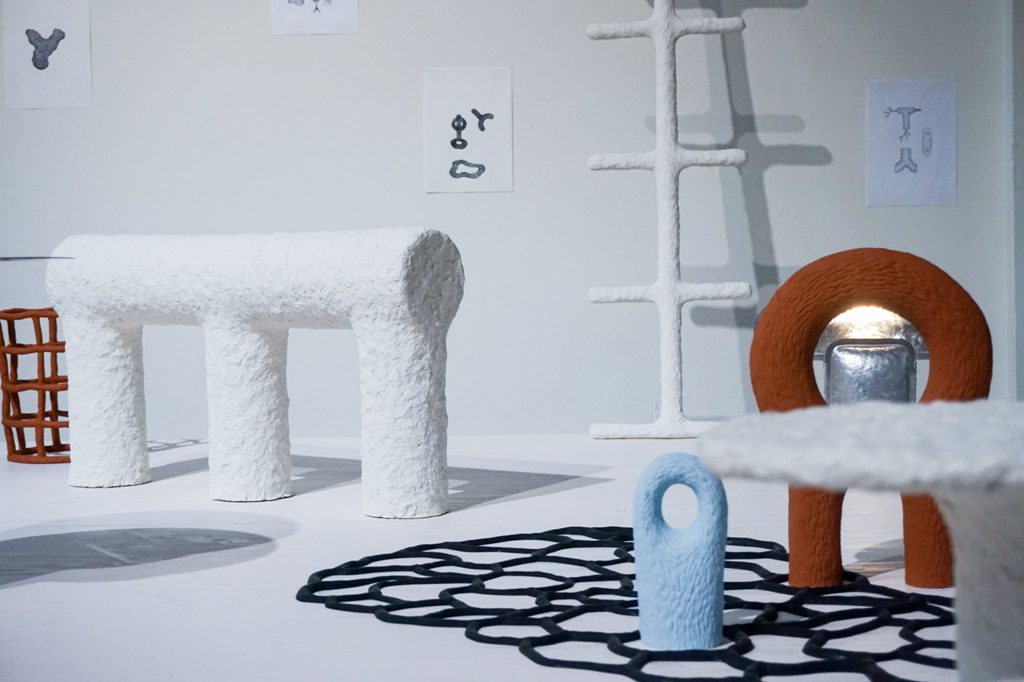 ‘Drawn Objects’ by Sigve Knutson explores how a designer might work if the qualities of drawing were applied to the various phases of a production process, with a multitude of ways to apply drawing to the production of objects. 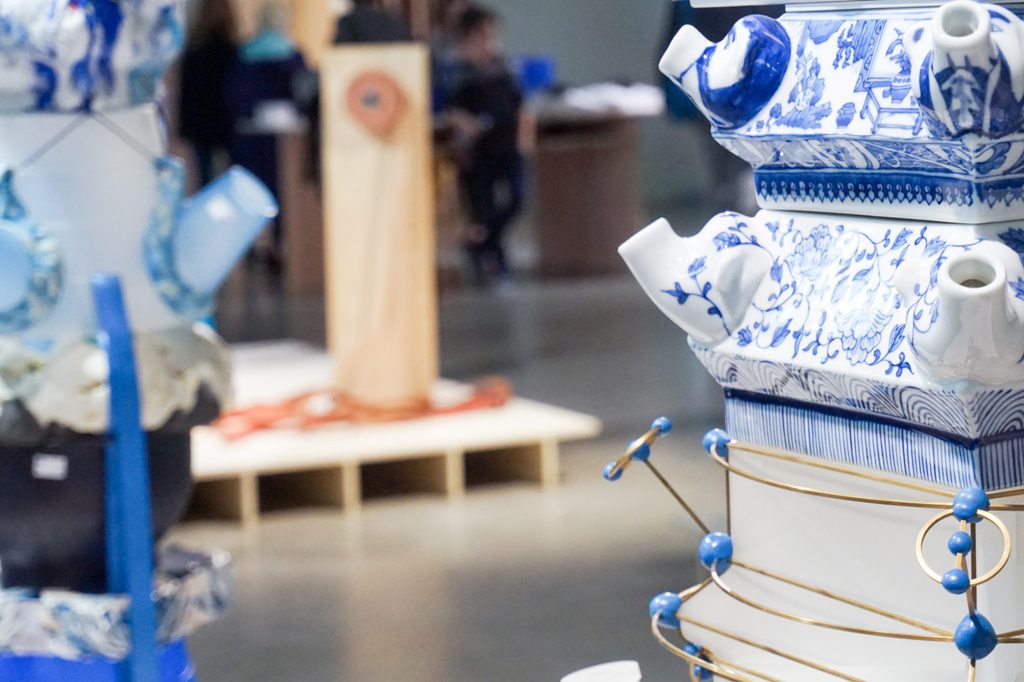 ‘Tulip Pyramid’ by Jing He

‘Tulip Pyramid’ by Jing He explore her identity as a Chinese and Ducth designer with these piramids. What does it mean to be original? The tulip vase is a 17th-century Dutch invention. However, its form, motifs and material all imitate Chinese porcelain pagodas.
All images ©italianbark
Cover:  photography by Nicole Marnati
::
BROWSE MORE DESIGN FINDS HERE

5 clever designs for your home plus interesting news