Do you ever walk by homes and wonder what’s inside? I often catch a glimpse of bookcases or dining tables through windows of residential buildings and imagine the lives of people inside. From Corso Magenta to Corso Venezia, most streets in Milan are host to fabulously historic homes and in the case of Villa Necchi Campiglio, you can have the key.

Villa Necchi Campiglio was opened to the public in 2008 by Fondo Ambiente Italiano (FAI), Italy’s National Trust. It was left in their care after the death of Gigina Necchi in 2001, who had lived there for many years with her husband Angelo Campiglio and sister Nedda. You can visit the grounds and take a tour with one of their fabulously curious and knowledgeable volunteers that share history in details of this important Milanese villa. 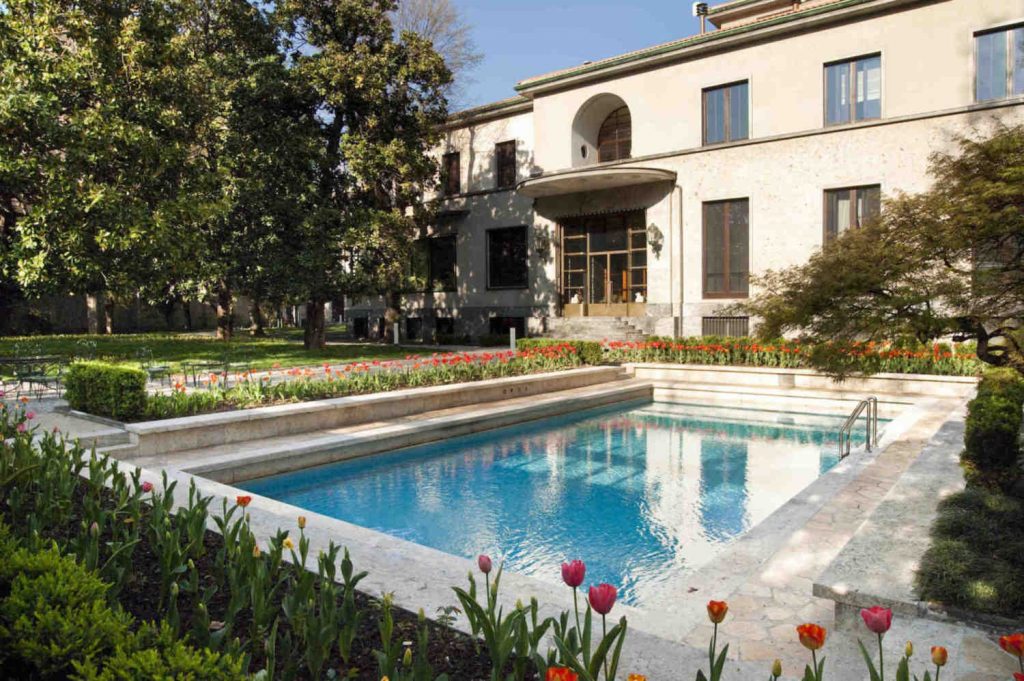 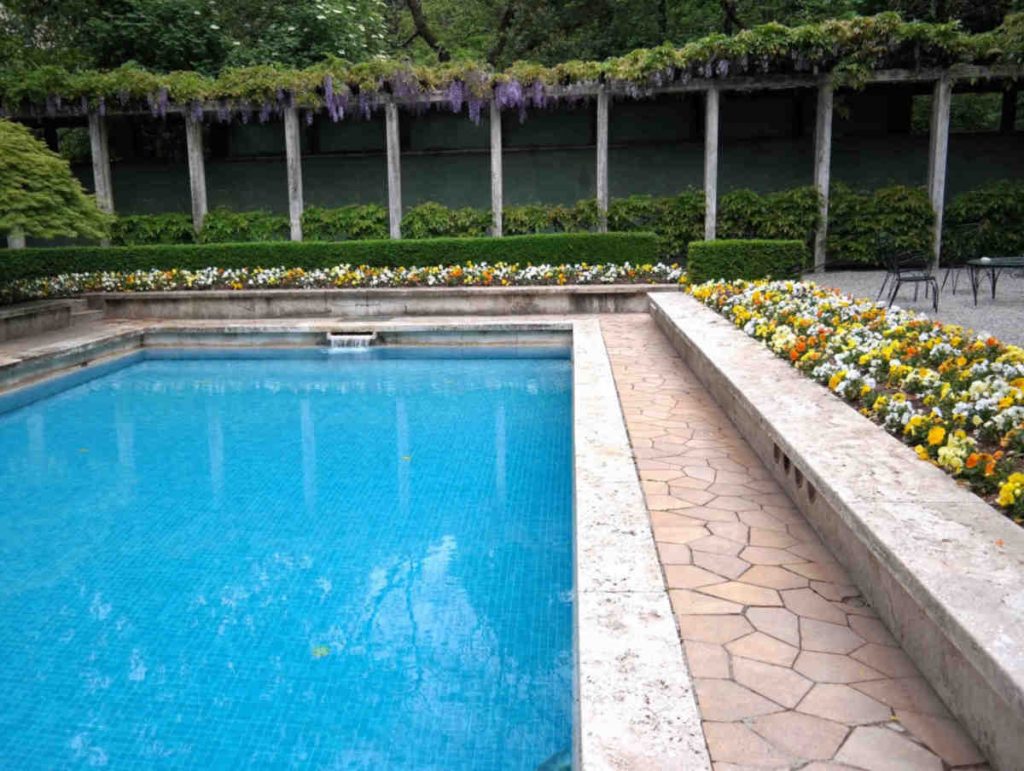 The Necchi sisters inherited a fortune from their father’s cast iron foundry and brother’s sewing machine company under their family name. (The Necchi brand was a competitor of Singer.) 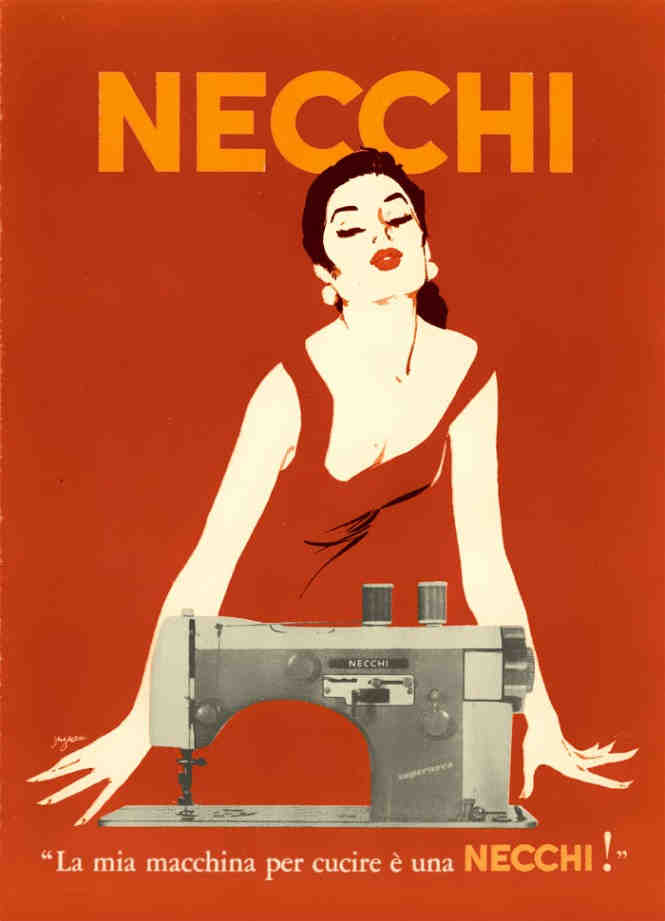 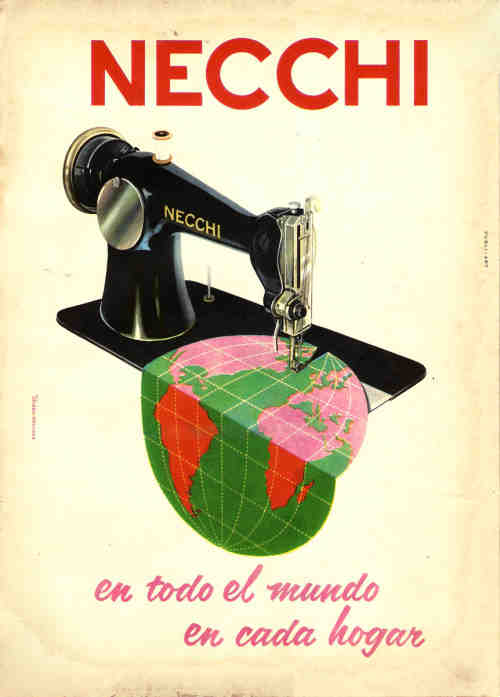 
Angelo had a medical degree, but once he married Gigina he founded NECA with her father to produce motors for refrigerators, boilers, and bath fixtures. The trio lived in Pavia before setting their minds to move and become Milanese, assisted by their wealth and status within the industrial bourgeoisie.

You may remember this villa from the Milan Design Guide, or from its feature in the 2009 film I Am Love by Luca Guadagnino, who also directed Call Me By Your Name. 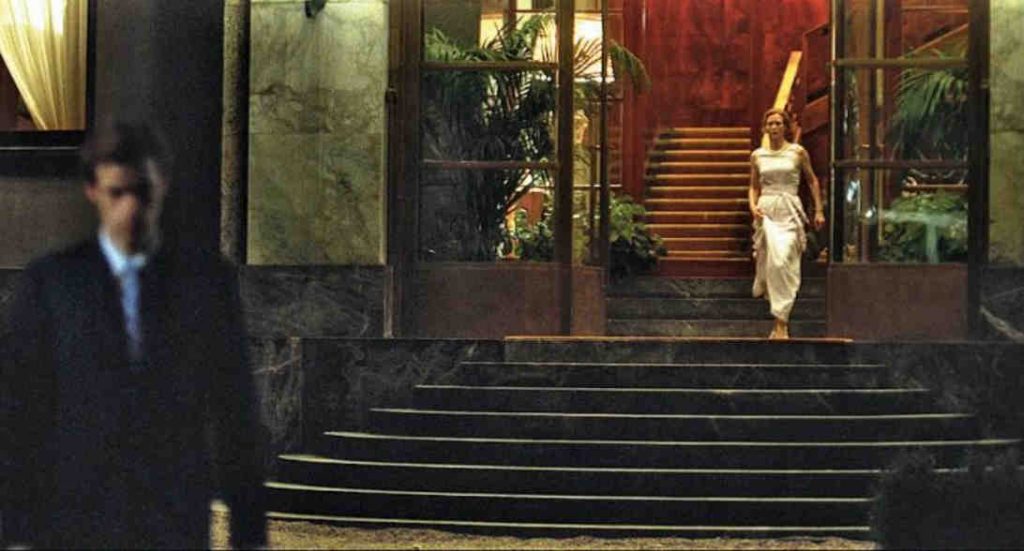 Photo Credit: I Am Love / MBDS

The villa was constructed between 1932-1935 by Milanese architect, Piero Portaluppi. He was employed to design Villa Necchi Campiglio as a gesamtkunstwerk (total work of art) reflecting the Milanese lifestyle and modern trends of the time – Italian rationalism, Fascist architecture, and Art Deco. Straight lines of rationalism were softened with rounded accents from Art Deco and Greek inspiration. They spared no expense with the expansive exteriors, building a tennis court and the first private heated pool in Milan.


“A house designed in every detail by the celebrated architect Piero Portaluppi and surrounded by a tranquil garden in the centre of Milan. A voyage, by means of precious furnishings, artworks and quotidian objects, where time stands still and where you can breathe the lively cosmopolitan atmosphere of once Milanese upper-middle class.” – FAI 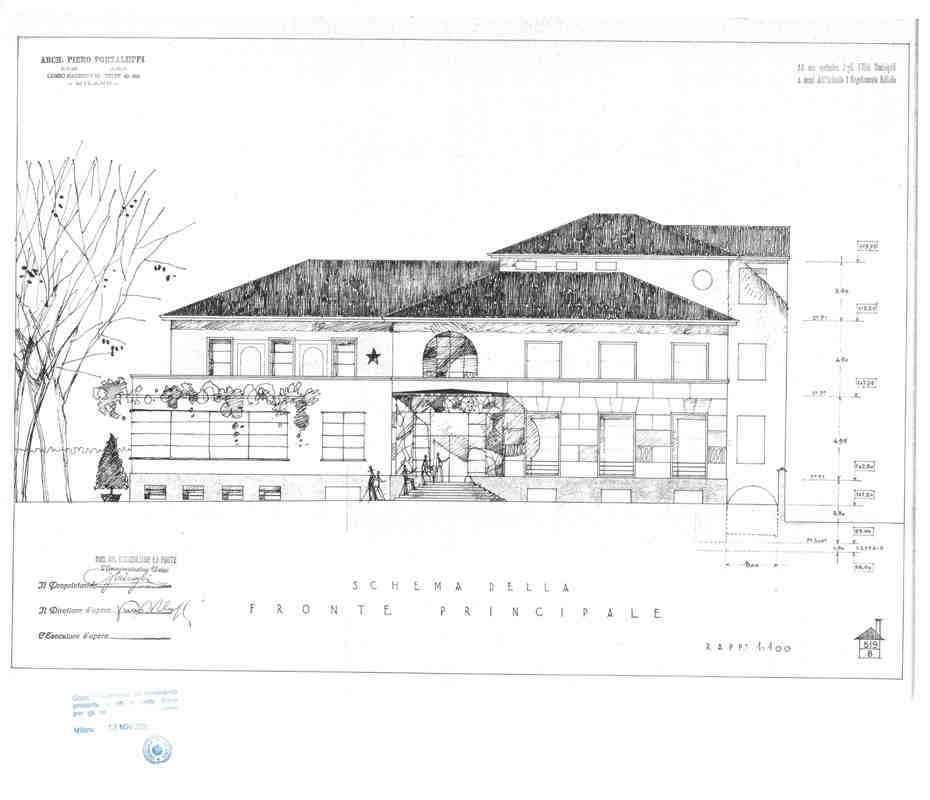 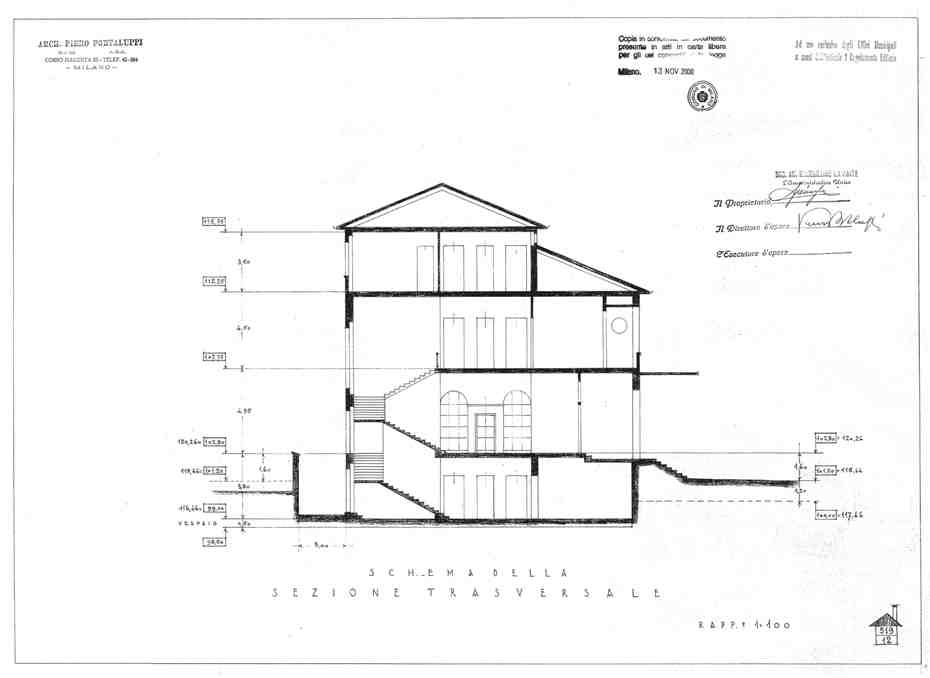 In 1943, the Fascist Republican Party took over the villa to use as their headquarters. Later, it was shortly occupied by the English, then as the consul of the Netherlands before the family returned from their countryside home in the 1950’s. They employed Tomaso Buzzi to update the interiors and furniture with a classical style, which was more popular at the time. What you see today is a mix of this classical style and the original interiors.

Their home was used for hosting jet-setters, aristocrats, and even royalty, with luxurious details built into each corner of every room. Materials included several types of wood (walnut staircase, rosewood bookcases, poplar burr, and mahogany), various shades of marble, steel, travertine, and even black crystal bathroom doors. 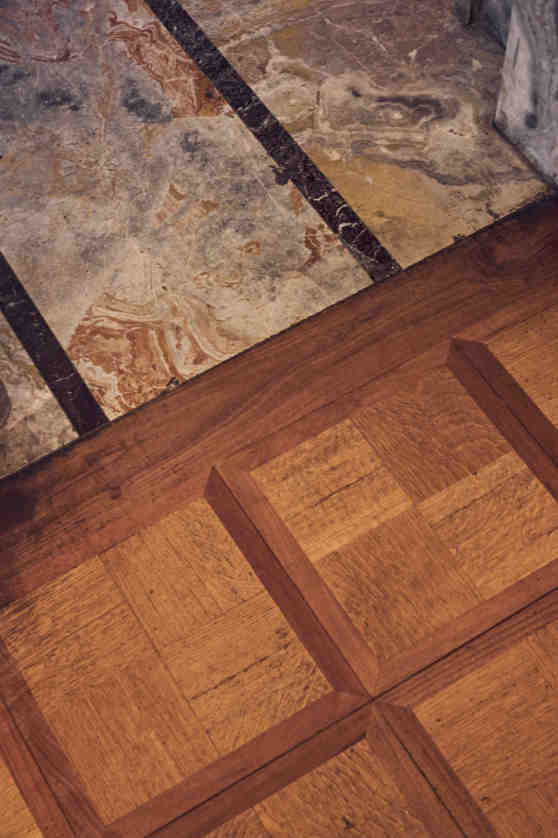 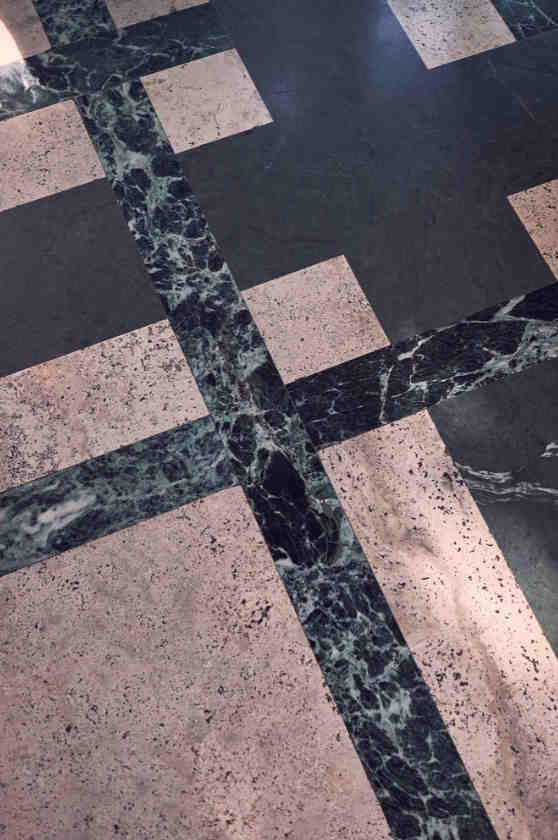 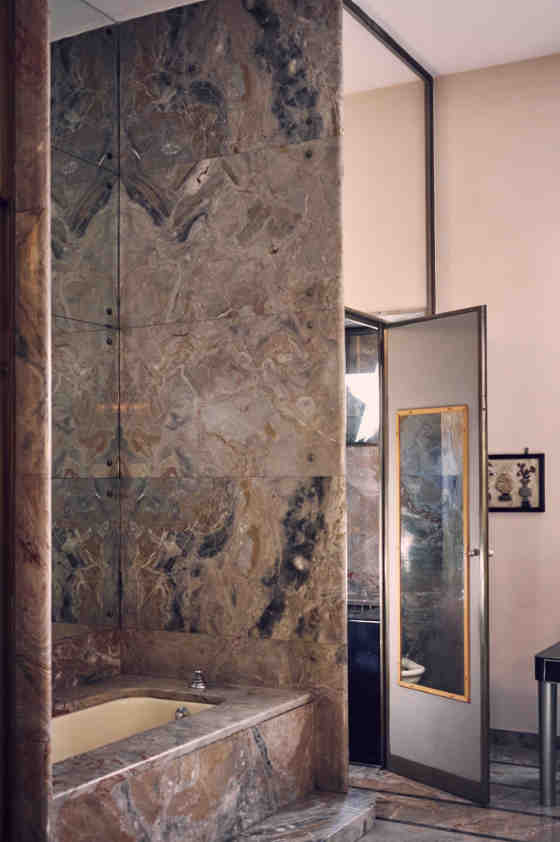 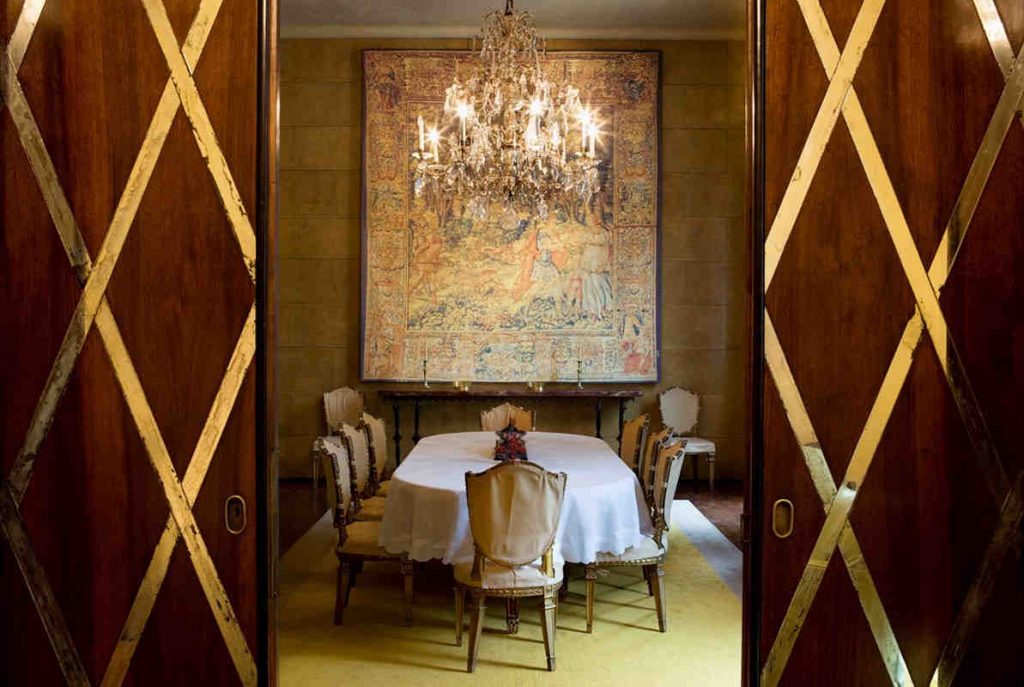 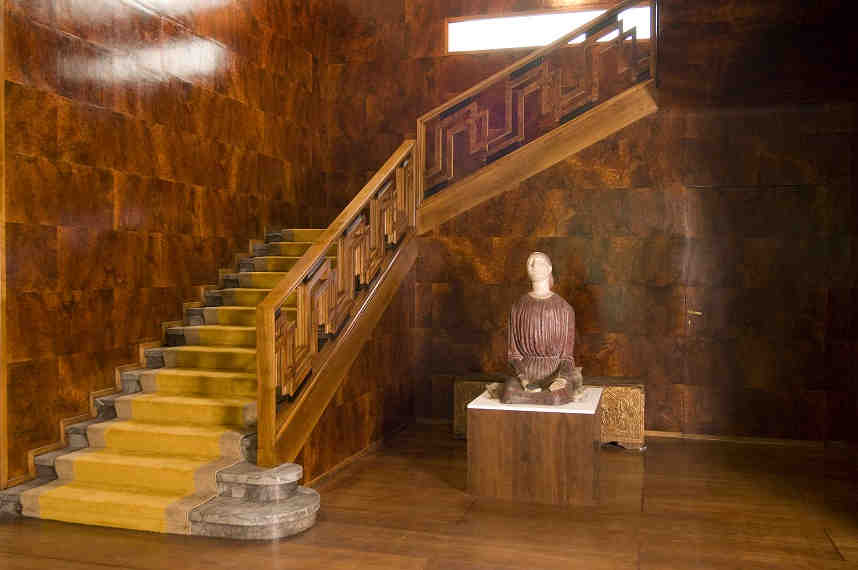 A guest’s first seat in the villa would have likely been in the veranda, which still hosts a scene of greenery with tall double pane glass windows featuring a small greenhouse growing between, keeping noise out and protecting from gusts of wind. A luxurious side table still stands in this room made of solid lapis lazuli. 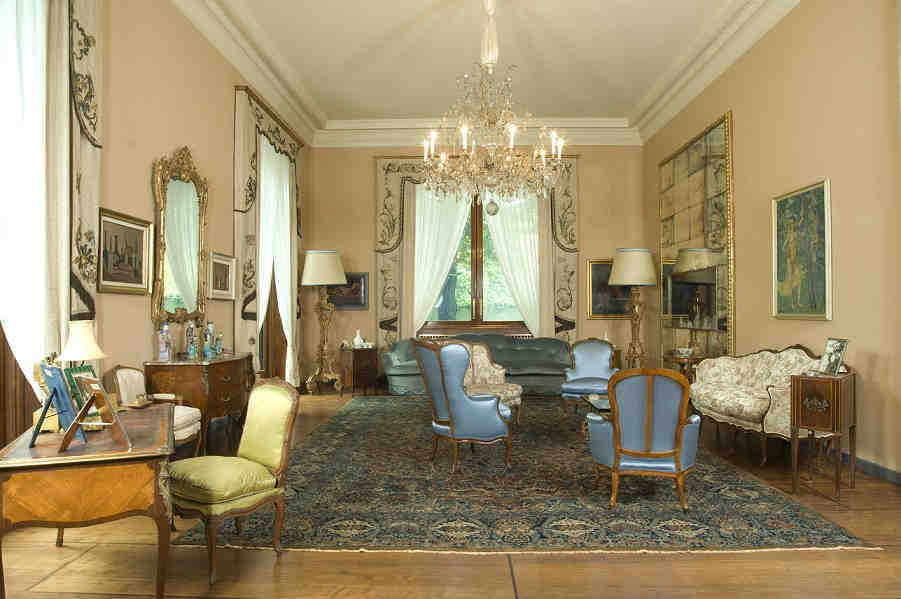 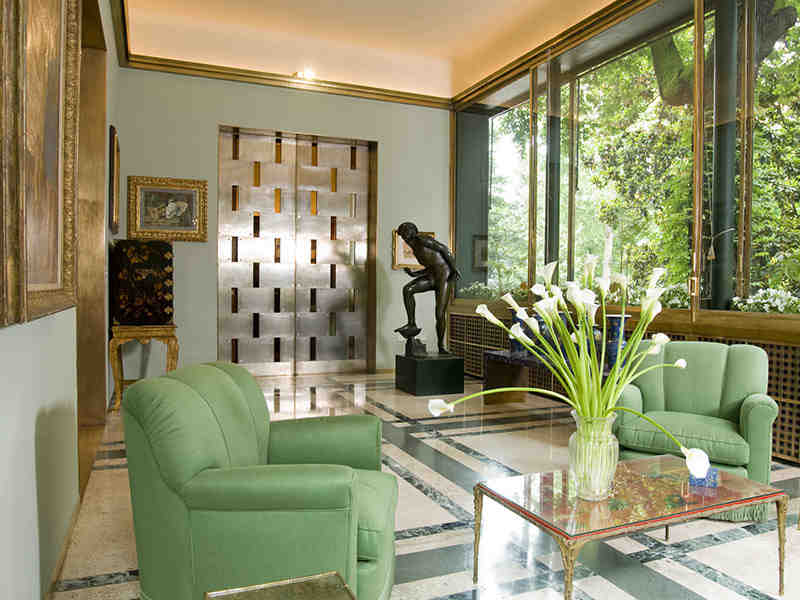 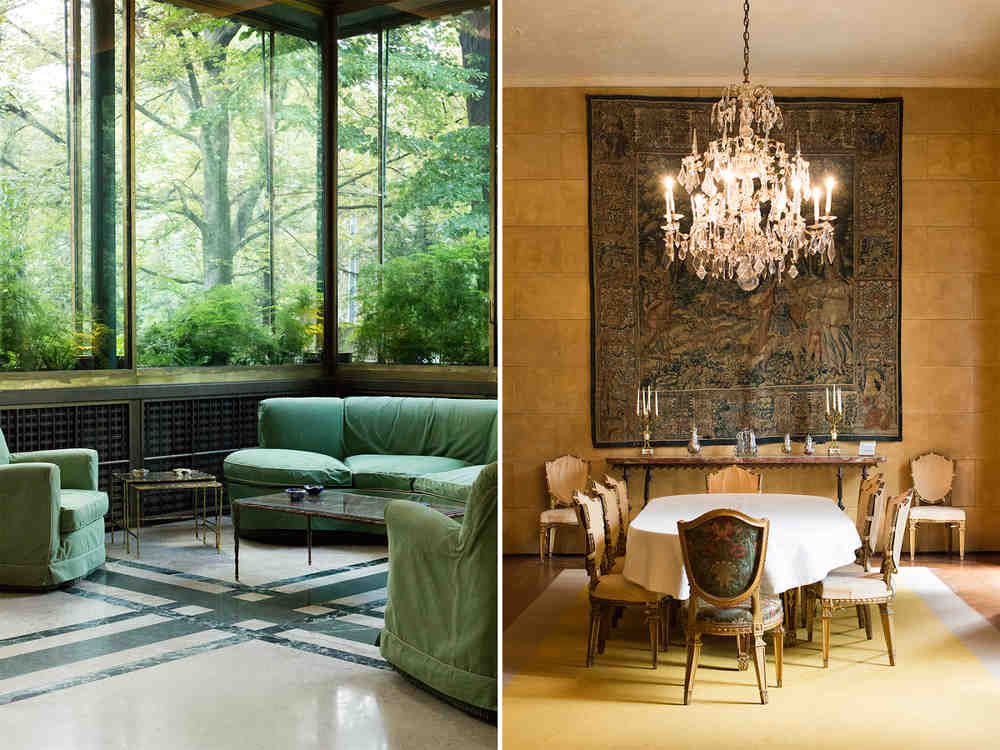 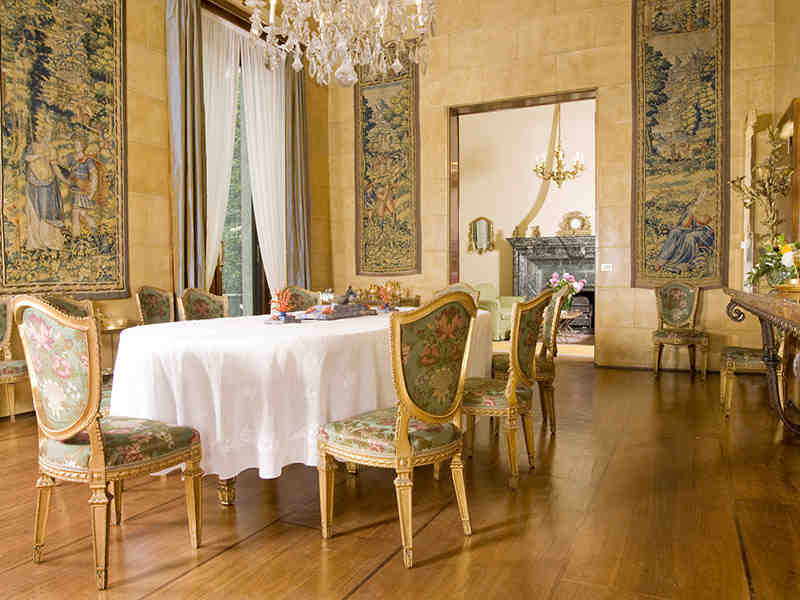 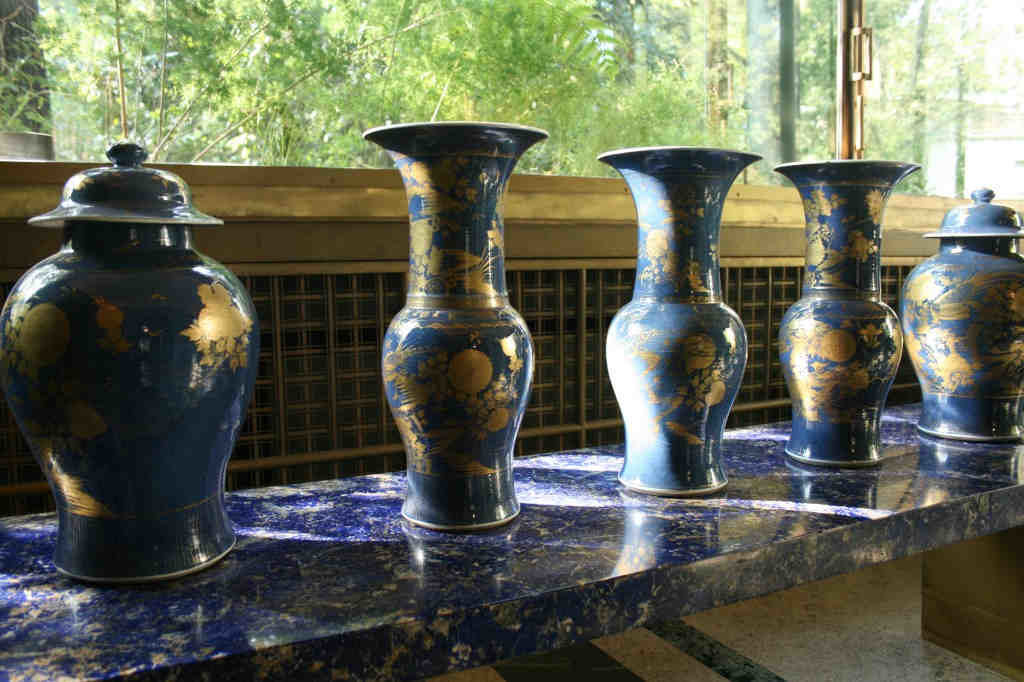 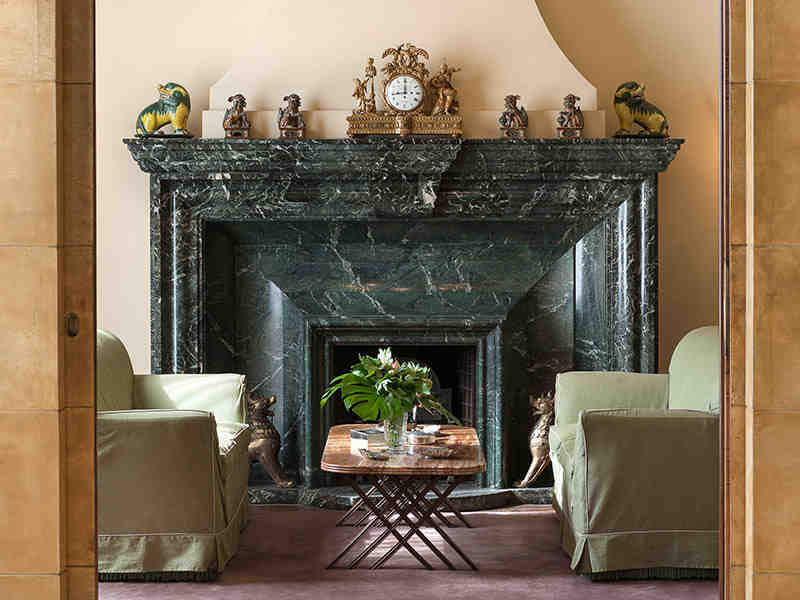 The original plasterwork ceiling in the library has a daring diamond motif designed by Portaluppi. Other modern technologies were incorporated into their lavish living quarters, complete with an elevator, dumbwaiter, and expansive intercom system for the house staff. 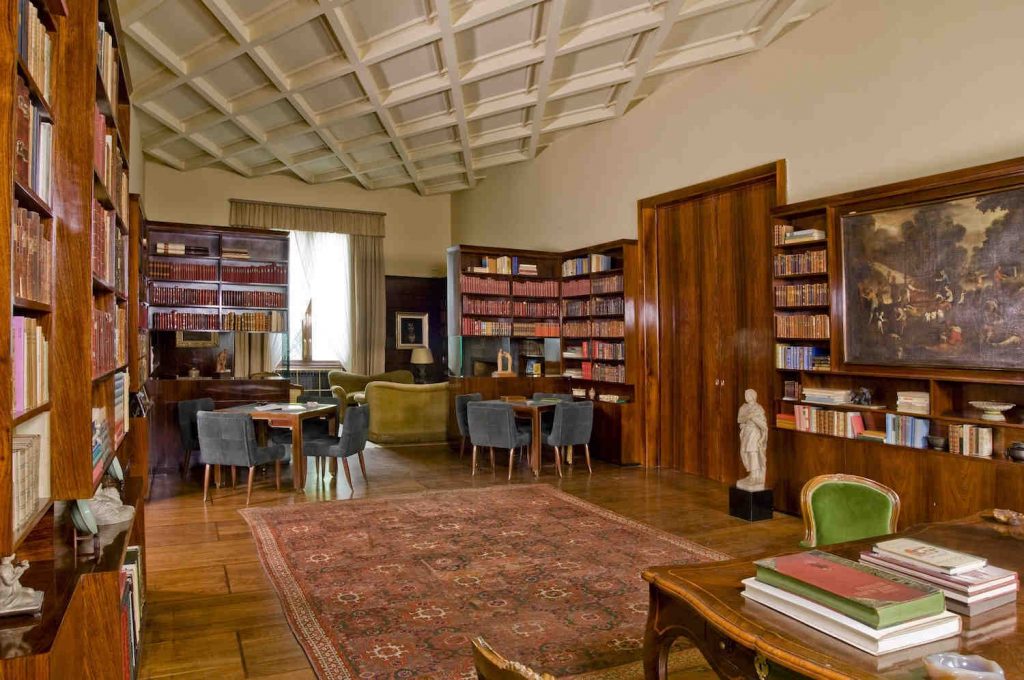 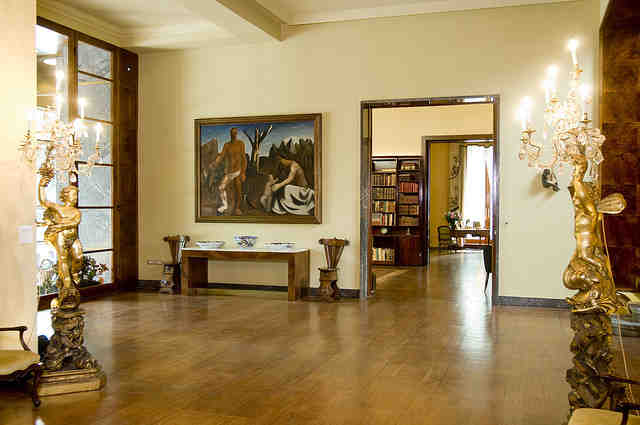 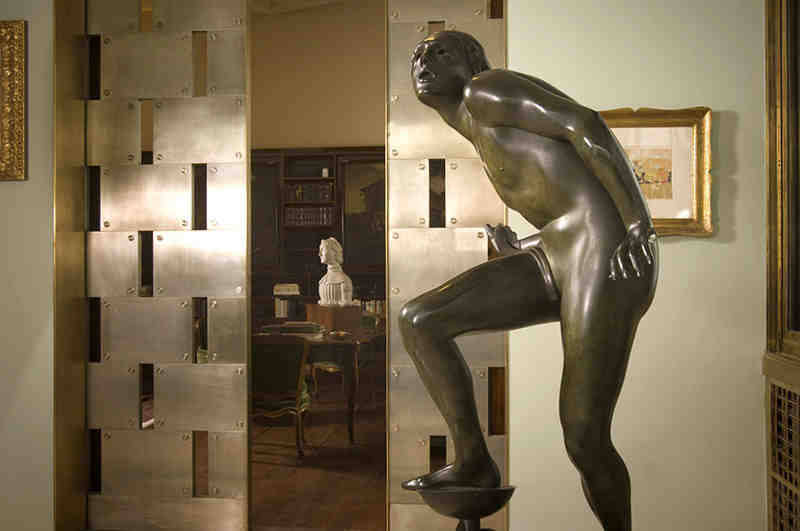 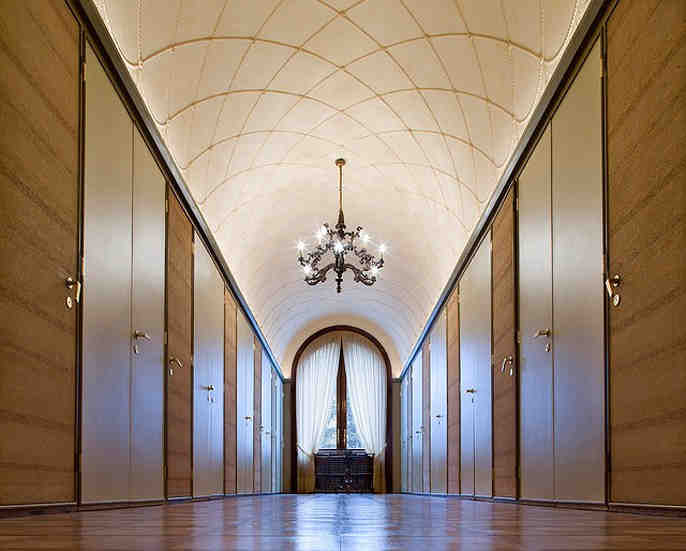 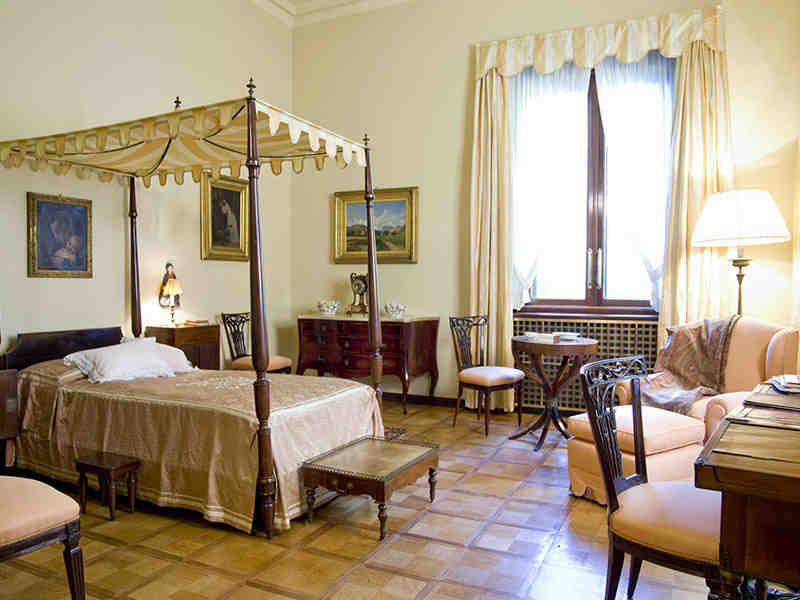 Today, the villa hosts art from Claudia Gian Ferrari’s collection (including Italian artists such as Boccioni, Morandi, Carrà, De Chirico, Martini, and Wildt) and the Alighiero and Emilietta Collection. 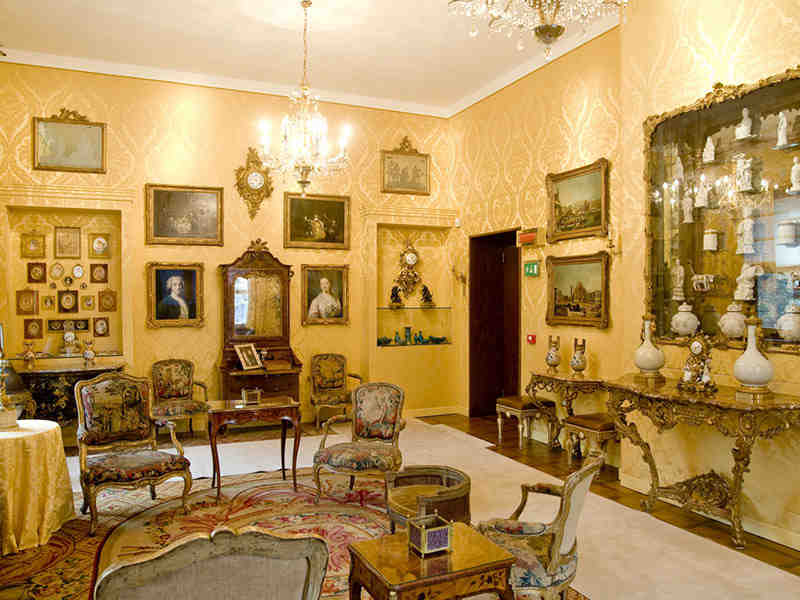 There are also many events and parties hosted inside the villa and glass pavilion domed tennis court, which was sponsored by Giorgio Armani in 2015.


“I was immediately charmed by the artistic and cultural beauty of every single detail at Villa Necchi Campiglio, a building that features a refined, worldly and typically Milanese lifestyle. That is why I’m happy to further support the restoration and protection of the Villa’s tennis court. Many years have passed since I first got in contact with FAI, and we still share the same passion and many projects aimed at protecting all the wonderful works created by human intelligence.” – Giorgio Armani 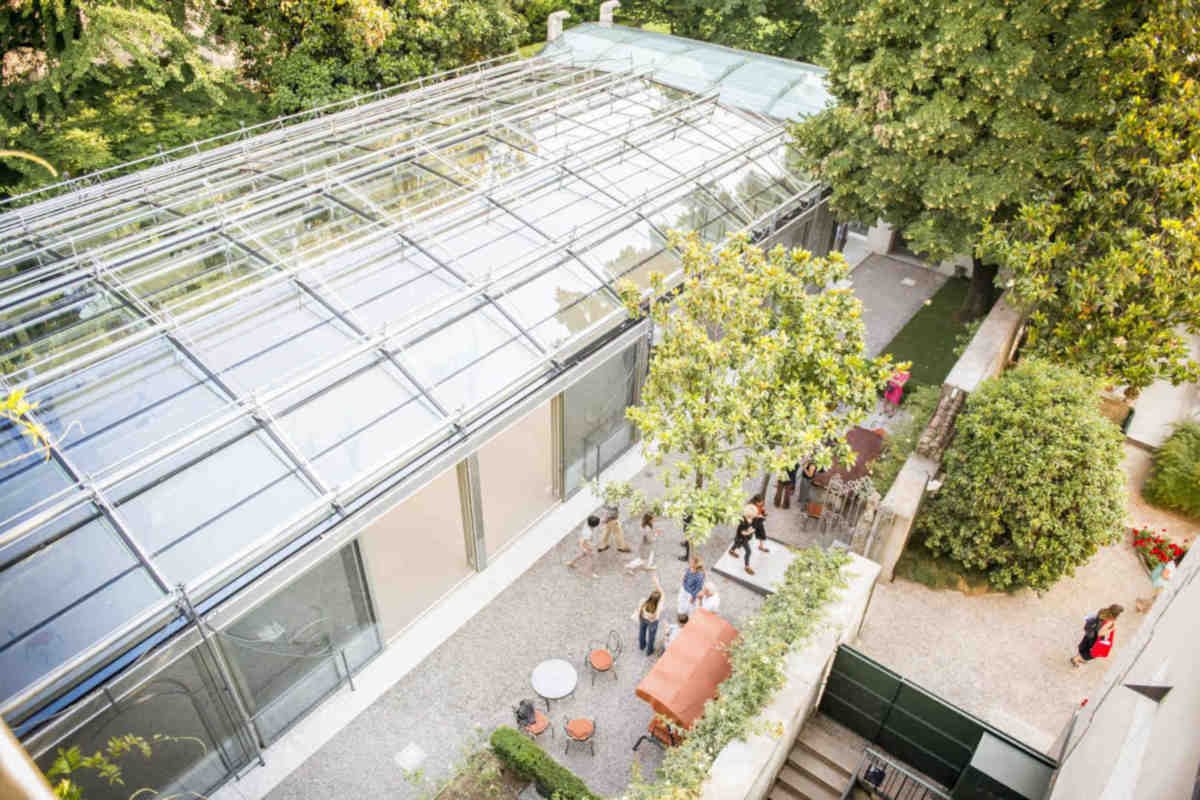 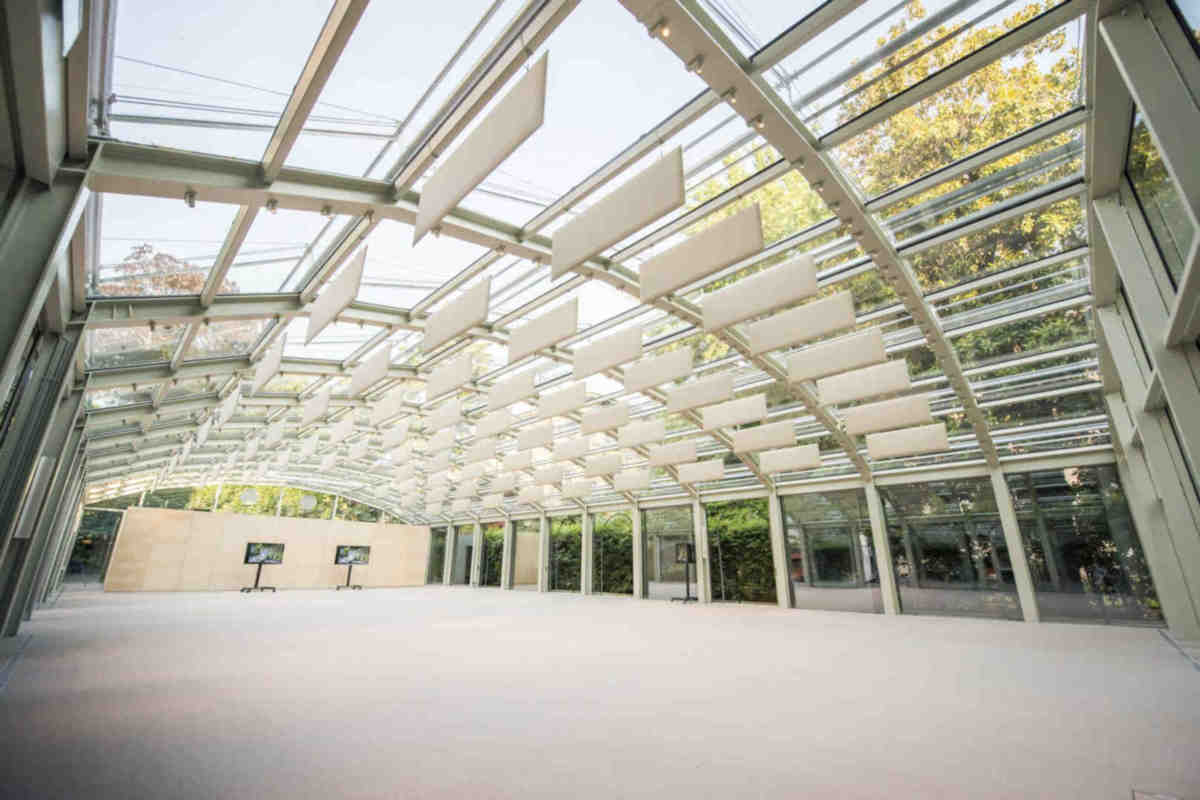 Let us know if you stop by Villa Necchi Campiglio on your next visit to Milan!

Sitting on a colander.

100 Years of Achille Castiglioni, the master of Italian Design

8 Great Museums and Galleries in Milan